Tales from Elle and Mordy

At this stage in my life, I’m fairly used to people looking at me like I’m crazy; however, what I didn’t expect was how frequently I would get that look when I told people I was getting a puppy.

“But don’t you think you have enough on your plate already?”

That?  That was typically how the conversation with anyone outside of my doggy daycare provider went.  There’s no denying that my plate is fairly full between the whole single mom thing and that pesky career thing, but the heart wants what the heart wants and, more importantly, the heart knows what the heart needs. I had zero doubts in my mind that this was the best decision I could make for me.

Perhaps in all of my thought and excitement I forgot to factor in those two little humans I play mom to.  I mean, I did ask my kids if they wanted a puppy, and of course every two and four year old wants a fluffy, puppy.  So, bases covered, right?

Maybe not so right.

While few things in this world are as magical as the relationships forged between dogs and children, puppies and small children are a world of repeated “ OMG what have I done.”

Now, don’t get me wrong, my children absolutely love Mordecai and Mordecai absolutely adores them, but it was a process to get here and that process had more to do with my kids than it had to do with Mordecai.

Mordecai was 8 weeks old when I brought him home and, to be perfectly honest, a pretty easy puppy.  That said, he was and still is a very mouthy pooch.  I will take some blame for that because I love to wrestle and play rough with my dogs, but it also is his play style—he likes to do those things and the fact he’s best friends with my parents’ little 20lb fluff ball is firmly rooted in the fact they share the same rough play style and less to do with the fact they are both dogs.  To that point, my brothers’ dogs do not share that play style and have choice “words” for Mordecai when he attempts to engage them in rough housing. So, we have a penchant for roughhousing, a sprinkle of puppy playfulness, a heaping scoop of teething, and a dash of two small children who do the exact opposite of what I’ve told them to do with a puppy in situations all culminating in a recipe for a lot of crying and pleas to send Mordecai away.  Just to be clear, that whole last part isn’t an option. The sexy pup stays.

It was a struggle.  It took a lot of repetition, training, and work to get my kids to the point where we all lived as one happy family.  Yes, you read that right—my kids.  I trained my kids.  Mordecai got training too, in fact the girls were involved in his obedience training which helped a decent amount in him viewing them as higher level members of the pack and not so much equals, but even that was to get my children to the point of being able to adequately handle having a puppy.  You see, Mordecai, no matter what, will always be a dog.  No amount of training, obedience, puppy manners or whatever will ever change that, and, as I frequently tell my kids, you can’t get mad at a dog for acting like a dog.  What you can do, however, is modify your own actions to get the dog to act like the dog you want him to be.

Let me explain—along with basic rules, like whatever toys are left on the floor that Mordecai eats will not be replaced because they shouldn’t leave their toys out, I worked with the girls to tailor their behavior to get desired behavior from Mordecai.  This took longer than I care to admit.  In fact, my four year old still runs around the house simultaneously screaming at Mordecai to leave her alone, which in dog world more closely resembles an invitation to chase her and play with her than a bug off.   Mordecai is now 7 months old and we are at the point where if  they are playing with a particularly delicious toy, like Legos, my kids will give him a treat outside of their play room and close the door so he can’t go in, they will take a toy out of his mouth and replace it with one of his toys and make that correction until he leaves poor Barbie alone, they will stop dead in their tracks and tell him to sit rather than run away screaming to stop him from jumping on them in the morning, and they have somewhat consistently realized that if they don’t eat the food in their hand pretty quickly, Mordecai will steal it.  We’re still working on that last one—apparently eating and watching TV is one of the harder multi-tasking skills to acquire.

Getting to this point of a somewhat well-oiled machine took a lot of work and a lot of letting them figure it out.  Many a Barbie accessory has been puked up in my bedroom in the process, but my kids no longer get mad when Mordecai takes their toys from them, decapitates a Barbie (seriously, this dog has an insane skill in that department), or steals entire chunks of Play-Doh from the table. In fact, my 2 year old doesn’t even get mad when Mordecai swipes her pacifier right from her mouth, she just laughs, grabs it back, and tells me to wash it.  This was all accomplished by giving them the tools to be in control and, as I said, letting them figure it out.  I let them be the boss of how things would go with Mordecai.  Instead of telling them how to behave, I would suggest things and let them decide:  “Maybe instead of running away, maybe you should stop and he won’t chase you;” “Maybe instead of chasing Mordecai because he took a toy, show him what he should play with;”  “Maybe you should close the door to the playroom so Mordecai won’t steal Legos;” “Mordecai has a Lego, what should we do about that?” Obviously, I intervened as necessary and Mordecai was taught the rules, but in a sea of endless temptation you can’t fault a dog for, well, being a dog, so my focus was more on the kids.  I let the kids control how they reacted to Mordecai and let them figure out what behavior got the best results from him.

In addition to all that, the girls help me take care of Mordecai.  They may only be 2 and 4, but each of them is responsible for his breakfast and dinner, refilling his water dish as needed, as well as taking him out (when the weather is nice, this is the Tundra after all) and getting him ready to go in the morning by putting his leash on.  Small things, but things that help Mordecai view them as higher up on the pack totem pole and, conversely, help the girls see Mordecai as a member of the family that needs to be cared for.

I think this approach is the reason my children can play Just Dance and jump around like crazy women, and Mordecai doesn’t try to nip them or grab their clothing.  They’ve shown him, by their very own actions, that they are the masters and should be treated just as he treats me, Mom.

I may have made the decision to get Mordecai for me, but every night after dinner I see my little family watching TV—Mordecai looking content and happy as two princesses use him as a pillow—and I realize I made the best decision for us. 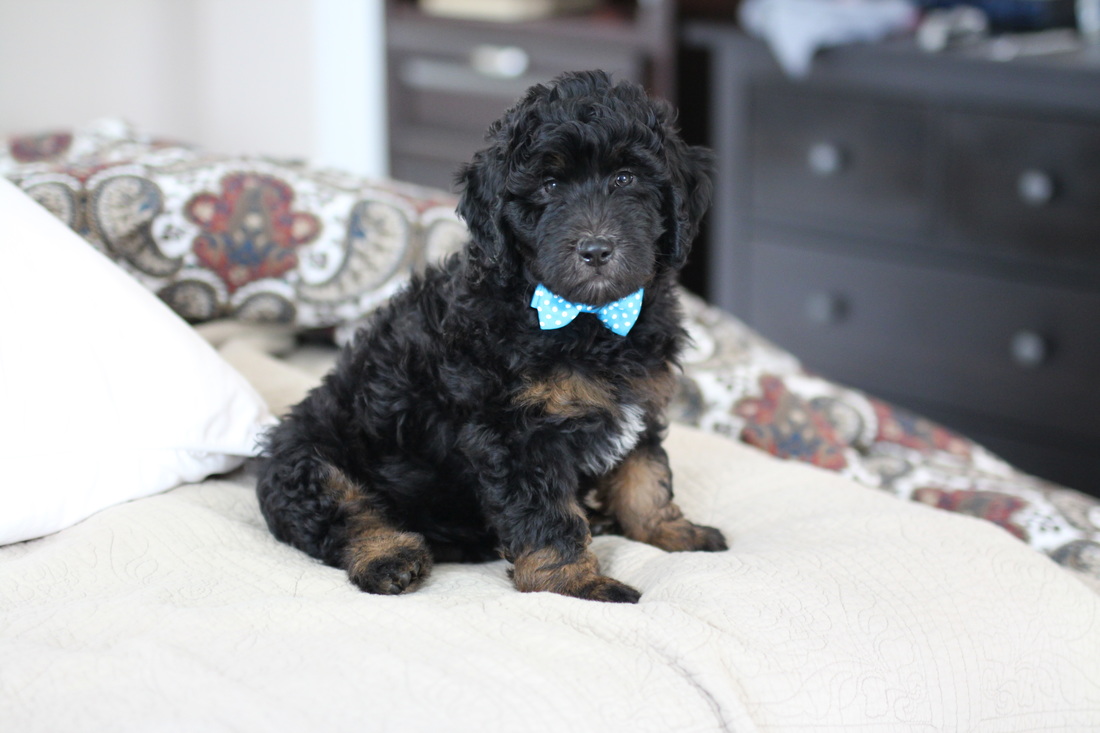